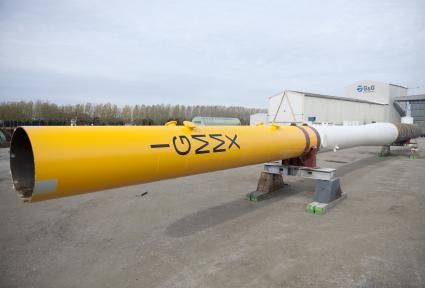 G&G International is to build 30 foundation structures for European offshore wind farm. The German Groups EWE and ENOVA have placed an order with G&G International in Willebroek worth 55 million EUR for the construction of Riffgat, a new offshore wind farm close to German Borkum. G&G International will deliver 30 gigantic foundation structures for offshore wind turbines between May and July 2012. It is the largest order that the engineering and construction company has ever received and represents the pressure vessel manufacturer’s definite breakthrough into the renewable energy market. The project will provide at least 25 additional jobs and the company is setting its sights on further growth.

By summer 2013 the German energy supplier EWE and project developer ENOVA plan to supply 100,000 families with green energy (108 Megawatts in total) produced by 30 offshore wind turbines close to Borkum located on the German-Dutch border. The total value of the Riffgat wind farm, which will occupy 6 km², amounts to 400 million EUR. The entire project will literally be anchored to the seabed by the foundation structures supplied by G&G International and its partners.
THORMARINE will build the watertight hatches for these structures.